A cairo woman makes a living for her family, takes care of her sick daughter and is the regular guardian of her street. How does she cope with her manifold roles?

This documentary film takes us through the daily life of Halima Mohamed Ahmed or “Om Amira” (Arabic for “Amiraʼs Mother”). Original-ly from Aswan in Upper Egypt, she now lives in Cairo on a Downtown rooftop with her husband and her two daughters. Her eldest daughter, Amira, is suffering from a weak heart and needs constant care. Her husband Gamal is too sick to work. All responsibility for the family, food and care lies with Om Amira. Well known as the “Potato Lady”, she sells her fried potato sandwiches in a side street, a few metres away from Tahrir Square where the Egyptian Revolution took off in 2011. Her daily routine begins at night, when she prepares the potatoes for frying, and it ends in the morning, when she has sold her sandwiches. She puts up with harassment and, sometimes, violent clashes due to ongoing protests in Cairoʼs streets. Despite all the mayhem and trouble, Om Amira keeps up her smile. Her simple existence is a comfort to her neighbours, and the protestors roaming the streets consider her the guardian of their territory. 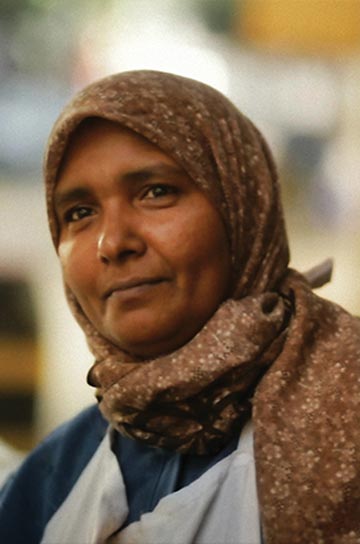 Request the link for the full movie:

The material of ANA HUNNA can be ordered free of charge through this page. All we need from you is a registration stating your contact details. We would also like to ask you to link your order with a donation to the association. If you wish to receive a donation certificates please contact us.

Beyond The Sky
Scroll to top