“The real accomplishment of ANA HUNNA is feeling that you have changed some people’s misconceptions, and then you feel that you have delivered your message,” Sahla Otoom says.

Sahla, a trainer from Jordan, has seen the effect of ANA HUNNA on both the participants and facilitators. She first took Training of Trainers (TOT) and soon became a lead trainer. She trained 25 women in her first session. But the success of that session echoed throughout the city that Sahla started giving a session every week to men and women of all ages and social backgrounds. “We reached a number of participants that we couldn’t have imagined and distributed the Educational Kit on everyone so the biggest number of participants would benefit from ANA HUNNA,” she says.

In Sahla’s sessions, she screens the ANA HUNNA films. She notes that the movie that has the most on her participants is the Egyptian documentary Om Amira. So much so they always request a second screening. “Their sympathy for Om Amira drove a group of my participants to write her letters to console and support her,” Sahla says. In the 25 letters, the participants described Om Amira as a symbol for their daily struggles and urged her to be strong.

“After the screening of Om Amira, I felt that women became more aware of their rights. They were thinking of all the scenarios where the local government could have saved Om Amira’s daughter, and thus, they started to ask about their own health insurance and pensions,” Sahla says.

That also reflected on Sahla herself, because she as well had her own struggles. “Like everyone else, I felt that the world was falling apart when someone dear to me was sick. But after my experience with ANA HUNNA, I know how to deal with my problem, to be in control of the situation, and to find solace in calamities,” she says.

Overall, more than 500 women participated in Sahla’s ANA HUNNA workshops. When she finds different reactions and positive attitudes from women with even worse conditions, it pushes her forward and they all motivate each other.

In one of the screenings of Beyond the Sky that were targeted for high school girls, many girls didn’t know how to pursue their dream jobs. But Tahani, the flight attendant in the movie, pushed them towards their dreams. “After the movie, we presented them with different ways to persuade their parents of their dream jobs. And indeed some parents were persuaded.”

“Believe it or not, even a five-minute movie can change your life. When you watch on-screen people with the same struggles as yours, you start to find ways to help yourself and not depend on others to help you,” Sahla says. 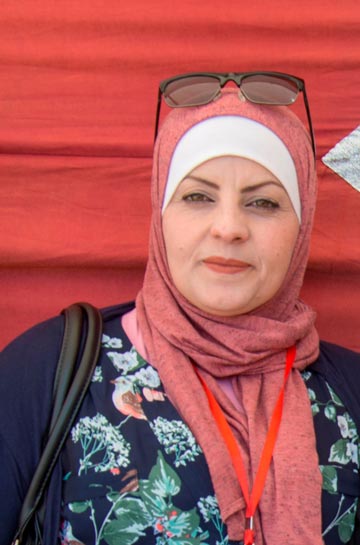