“ANA HUNNA really simplifies the material so it can reach the audience.”

Three years ago, I got hold of the ANA HUNNA material and was determined that it can be used to enable women’s full potential. I took the material to Noon Center and began screening the ANA HUNNA films, but the journey didn’t end with the movies’ endings. We began developing an Educational Kit at Noon Centre and made trainings throughout Cairo, Alexandria, and Port Said.

In most of our workshops, we target uneducated women. Usually most organizations that empower women use complex language and ideologies, but ANA HUNNA really simplifies the material so it can reach the audience. Most women in our screenings can’t even read or write, so watching a movie really leaves an impact on them.

When we did a workshop at one of Alexandria’s poorest provinces (El Nag’), we didn’t really know what to expect. To our surprise, the women were very responsive and were keen to discuss the movies. We also had a massive screening for Syrian refugees on International Women’s Day. The young girls there were deeply moved by the Jordanian movie Beyond the Sky; they all wanted to get a degree and become like the flight attendant shown in the film. One of the most heart-warming experiences I’ve gone through was seeing the reactions to the Egyptian documentary Om Amira. The audience is always moved to tears by this documentary in particular; they sympathize with Om Amira because they simply know her struggles very well.

Most women have already been exposed to many challenges. They don’t want to see just another movie about sexual harassment, immigration or poverty; because that’s the reality they live in. Instead they want to see a movie that tackles the solution and overcomes the problems. As for me, ANA HUNNA has given me an entirely new perspective of women’s role and how gender equality unlocks their full potential.

The fact that we were able to reach more than 500 participants has been a great accomplishment. I hope in the future we are able to reach more children and start with them from a younger age. Those movies have been so effective that it has got me thinking of all the other methods we can use to combine art with teaching. That should definitely be the next step. 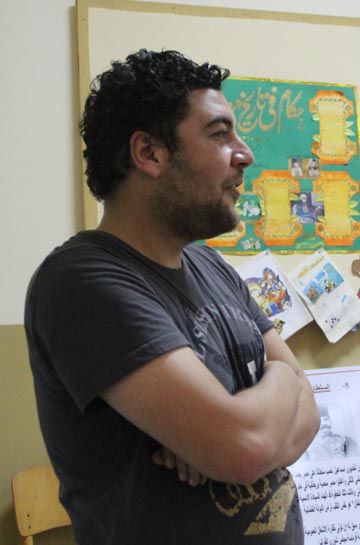