Founded her own company after watching the film “Beyond the Sky”

When Alaa Ragab, heard about a new initiative ANA HUNNA taking place in her school, she thought why not participate. But little did she know that this initiative will change her life forever.

After several trainings from the EPP Programme (Employment Promotion Programme), an employment promotion programme implemented by the Deutsche Gesellschaft fuer Internationale Zusammenanarbeit (GIZ), the 21-year-old student was introduced to ANA HUNNA. The ANA HUNNA sessions screened movies that resonated with Alaa’s personality, showcasing female protagonists who share the same lifestyle and face the same obstacles. These heroines portray what it’s like for girls to work in a conservative community that frowns upon a working female. Nonetheless, nothing stopped them from doing what they wanted.

According to Alaa, the idea of an independent woman is practically non-existent in her community. “You stir up a huge controversy only by stating that you want to work,” she explained. When Alaa wanted to defy the norms and start up her own business, no one supported her, being viewed as provoking by her own community. “I faced opposition everywhere both at home and outside. No one even took me seriously. I only found the support I needed at ANA HUNNA. Actually, the word “support” is an understatement, because they did so much more than that. They changed my destiny,” she says.

Living in Aswan, Alaa didn’t have many opportunities to participate in similar workshops. She believes the concept of using movies for educational purposes is novel – and almost revolutionary. Those heroines are now engraved in her mind because they evoked in her what others tried to bury. Whenever anything tries to pull her back in her work, they become her only motive. “It’s an example to follow. I became determined to become the role model I saw [in the film Beyond the Sky],” she says. With the empowerment she gained, Alaa ventured on a journey of entrepreneurship.

Alaa hopes that the workshop becomes more accessible and girls would seize the opportunity to learn, move forward, and seek change. Unfortunately, not everyone comes across such a catalyst to their dreams. That’s why Alaa thinks women in Upper Egypt need it the most. “I have morphed from a scared, little girl, to a brave, independent woman. And people can’t help but become curious of such an initiative that thrives on our empowerment. Everyone I meet wants to become a part of it as well.” 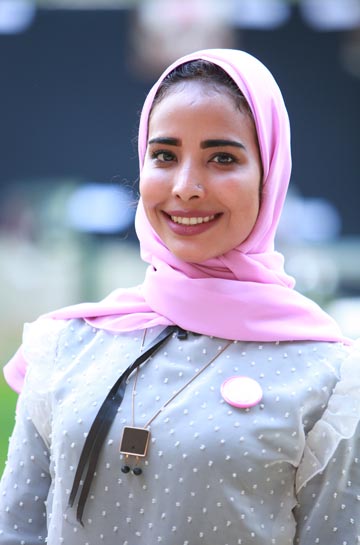