Participant in the Madrasti initiativ

“I felt that some boys went home after the screenings to change their attitudes towards their sisters.”

It all started when I participated in the Madrasti initiative where the ANA HUNNA program was recommended for anyone interested in women’s rights. As someone who strives to empower women, I was intrigued by its concept. So I sent my name to the Deutsche Gesellschaft fuer Internationale Zusammenanarbeit (GIZ) and was enrolled in the ANA HUNNA Educational Kit Facilitation Skills Training.
Being only 24 years old, I was the youngest to participate. Via the three-day training, I grasped the essence of the initiative. It fascinated me because it’s different when you see real-life experiences of working women on screen. I was distinguished for my outstanding participation and was nominated to start giving workshops. I contacted several schools’ students’ council to tell them about ANA HUNNA and encourage them to participate. Most of the schools have never heard of such an initiative before.
Both boys and girls participated in the trainings, which gave our debates more depth; they drew our attention to some details and we drew theirs to other details. Most boys had cultural misconceptions regarding women’s roles at first, thinking that their place is at home. But we were open for discussion; we listened to them, debated them, and changed their misconceptions.
In one of the trainings, we watched the Tunisian film Selma, which sketched out our daily lives and struggles, and meticulously discussed it later. At first, the male participants were totally against a woman driving a taxi. But when we argued with them that it might be their only source of income, they were convinced.
By the end, they were really fond of ANA HUNNA and encouraged others to participate.
I’m pretty sure that almost any girl wants to be entitled to her own basic rights, but sometimes boys get in the way. They have been raised on customs and traditions that marginalize women and normalize stereotypes. However, with the discussions ANA HUNNA presents, we enlighten them with new perspectives and they become inclined to change their minds. Especially when they realize how women’s economic empowerment benefits the society as a whole.
I felt that some boys went home after the screenings to change their attitudes towards their sisters. I witnessed this change in my own home. My brothers were very curious about ANA HUNNA that one of them came with me to a screening once. Afterwards, my twin brother, who always thought of himself as superior, changed his attitude towards me. He used to ask me to do stuff for him, but now he does everything for himself.
On a professional level, I used to teach math to girls only. But after ANA HUNNA, I thought why shouldn’t I teach boys as well? At first I thought I couldn’t deal with them, but I realized it was easy. I became the girls’ role model and the boys’ favorite teacher at my school. 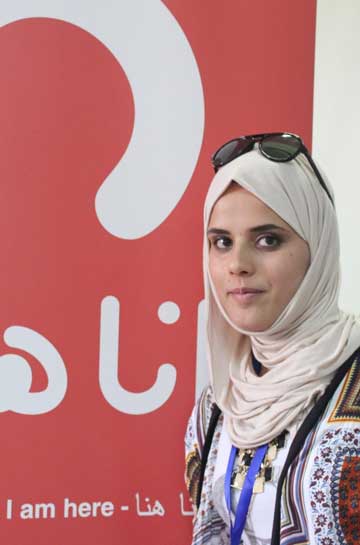